The unexpected round-trip in Santorini!

Heading from Oia, where the 5 star luxury hotel Canaves Oia is located, you begin to sense Santorini‘s magical aura, unveiling the secrets of this paradise on earth…

Oia (Ia) is regarded as one of the most visited locations on the island, built on a cliff in the northwestern part of Santorini, a volcanic cliff filled with quaint whitewashed houses and picturesque alleyways.

South of Oia, make sure to make a stop at Imerovigli village. Built 300 meters over the sea, at the highest point of the Caldera, Imerovigli is a quiet traditional village, featuring the renowned huge rock called Skaros, offering privileged views over the Aegean Sea and the volcano.

With its unique atmosphere of a forgotten era, Pyrgos amazes guests with its neoclassical mansions, churches and beautiful narrow paths…

Following the impressive route of attractions Akrotiri comes in view. Another fortified settlement of the Island that was buried when the volcano erupted 3.600 years ago. The excavations have revealed beautiful frescoes, tools and everyday life objects used at this ancient town.

As a final point, Kamari on the southeast part of Santorini will capture your heart. It’s famous long beach with the crystal clear waters and its natural green environment is preferred by many tourists for relaxing vacations.

And the journey never ends!

Discover the island in a round trip of a lifetime embarking from Canaves Luxury Suites in Santorini!

Please Share This
Related Posts
Hop on a Canaves Oia Yacht and Sail Away
Sail in style and capture Santorini from a different angle, indulge in privacy and luxury… 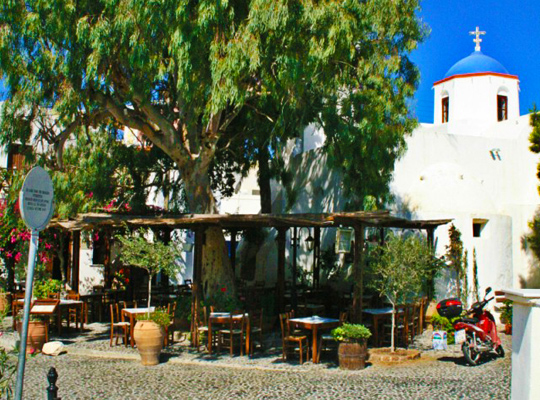